The period from the mid-60s to the mid-70s was perhaps the most glorious period for Alfa Romeo, both in terms of sales and sports victories.

It is in fact in this decade that Alfa Romeo becomes closer to the “people”: we must never forget that the cars produced by Alfa were certainly not within everyone’s reach, indeed, owning an Alfa Romeo was an indicator of financial well-being, and this is all the more true when you look back over the years: at the end of the 1930s only a rich person could afford one of the cars built in the Portello plant.

One of the popular heroines of the 70s was the sedan: let’s face it, the formula – which began with the Giulietta – was brilliant, a car for every day but equipped with a double overhead camshaft engine and two Webers to be exploited at will. . The same formula was taken up many years later by BMW with the M series. This car in particular, painted in a classic Moss Green combined with a camel-colored cloth interior, looks truly beautiful; we see nothing that is not in its place, both inside and out. The owner says that recently work has been done on the engine and gearbox for an amount of about € 2,000; he also adds that the car has zero rust and zero patches on the body, as well as being equipped with its original black plates. Find it for sale at €15,600 (today $19,000) here in Brogliano, Italy. 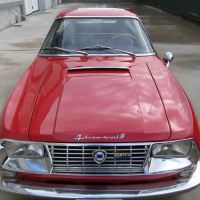