For lovers of the Porsche brand, there is no 911 more “pure” than the first series, also known as the “zero series”. Of course, the earlier the better.

This specimen belongs to the aforementioned series, and is also one of the first built as the first 200 approximately were built starting from August 1964 and the cars belonging to this first batch have now for about ten years reached astronomical prices, those of ’65 they are more affordable, although they are still very expensive.

This car is cheaper than many of its counterparts but the reason is obvious to everyone: it was hit hard and at the same time it must have hit another car; the damages are certainly “significant” and the chassis will surely have to be straightened out, but if you entrust the car to a valid professional there will be no problems. The good news is: the car was born in Polo Red, and it’s matching numbers. Find it for sale at $67,500 here in Los Angeles, CA. 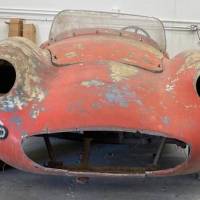