The golden age of the so-called “Sport” saw its greatest glory in the late 1950s, exactly when this car was built.

Sport was a category of cars that enthusiasts know well: uncovered cars (“Barchetta” type bodywork) handcrafted by often very small workshops, such as that of the Mandarini brothers (mandarini = tangerine) who applied the logo to their cars, which represented a tangerine on a green background. Fun fact: the Mandarini workshop is still active and run by the son (other than grandson) of the builders of this Barchetta which is said to be #002 of 3 built: other than the 750 cc (the first one in the bw photo), the other two, including this one, were built by Mandarini years later. We certainly know another one, restored a few years ago and painted in silver color.

The engine is a Fiat 1100 – 103 unit (at least so it seems to us) with a two carburettors manifold setup and the car seems quite correct even though, as you can imagine, these cars destined for competitions underwent many changes over the years, and often even during the same year. It seems to us substantially correct even we are almost sure that a car built in the city of Borrani wheels, would not have adopted English type wire wheels. Find it for sale at €358,000 (today $434,000) here in Milano, Ialy. 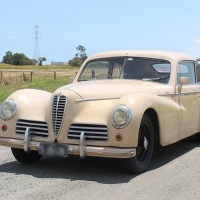 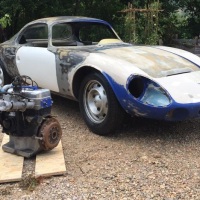