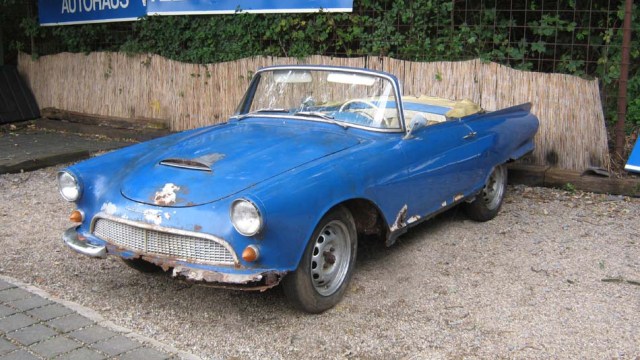 Exactly, you don’t need to have the eye of a great designer to under stand that this car was inspired by the Ford Thunderbird, which came out of production just in the years when DKW started producing this car.

The similarities are in fact impressive and yet, despite the obvious American inspiration, we have no problem stating that this car came out very well, has a beautiful line and beautiful proportions and, last but not least, a nice character that does not it confuses it with other European cars of the same era, above all we consider the typical two-stroke engine of the DKW of that era.

The seller says that this car saw the road for the last time in 1970 and since then it has remained locked in a garage, however it has obvious problems of rust along the entire lower perimeter; we can easily imagine that the floors need to be replaced but the rest of the car looks ok. We are not DKW experts and we do not know the degree of re-availability of spare parts, so we do not know how difficult it is to find bumpers, but we are quite confident that, with money and patience, everything is possible. Find it for sale at €12,500 (today $14,200) here in Köln, Germany.

Gallery | This entry was posted in For Sale, German and tagged 1000, 1962, dkw, project, sp, spider, thunderbird, to restore. Bookmark the permalink.